Scientists of the FMBC. A.I. Burnazyan participate in the work of the WHO International Expert Group, which was established to analyze the results of a mass screening of thyroid status in children in Japan after a radiation accident at the Fukushima nucl 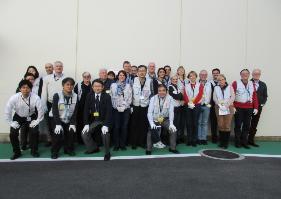 Between January 11 and 12, 2018, in Fukushima, Japan, the Ministry of the Environment of the Government of Japan and the International Agency for Research on Cancer of the World Health Organization (WHO) held a meeting on the development of long-term strategies for monitoring the thyroid after a nuclear accident, in which was attended by experts from the international expert group and the Fukushima Medical University. An international expert group was established three months ago on the initiative of the WHO following an appeal by the Government of Japan to conduct an independent examination of the Japanese mass ultrasound study of the thyroid gland in all children under the age of 18 (almost 380,000) who lived in Fukushima prefecture at the time of radiation accident at the nuclear power plant "Fukushima-1" on March 11, 2011.
The expert group included 16 leading scientists from different fields of knowledge, including thyroid cancer screening, radiation epidemiology, dosimetry, pathology, oncology, endocrinology and surgery from 11 countries (South Korea, Finland, USA, Lithuania, France, Russia, Italy , Germany, Great Britain, Ukraine, Japan). Head of the Department of Industrial Radiation Hygiene of the FGBU of the State Scientific Center of the Ferroconcrete Biomedical Research Center named after A.I. SM & nbsp; Shinkarev.
After the accident at the Fukushima-1 nuclear power plant in Japan, the public's concern about the possible increase in the incidence of thyroid cancer, as it happened after the Chernobyl accident, has increased significantly. To reduce the level of stress impact on the population of the consequences of a radiation accident, the Japanese government initiated a massive ultrasound examination of the thyroid gland in children of the Fukushima Prefecture. The results of the first (2011-2014 & nbsp; years) and second (2014-2016 & nbsp; yr.) Screening showed an unexpectedly large number of children with thyroid nodules and diagnosed with thyroid cancer, including a large number of microcarcinomas. A significant number of children (104 children) from 114 children diagnosed with thyroid cancer diagnosed during the first screening have undergone surgical intervention with complete or partial removal of the thyroid gland. From the available world experience it is known that a significant proportion of people who have thyroid cancer, especially those less than 1 cm in size (microcarcinomas), will live to old age and die of old age, but not of thyroid cancer, which can remain dumb (not getting no development) throughout the life of a person. At the same time, the removal of the thyroid gland in early childhood dramatically changes the quality of the child's later life. The Japanese public expressed acute concern over this state of affairs and demanded an independent examination of the actions of Japanese doctors in the treatment of thyroid cancer in children.
The meeting of the members of the international expert group directly with the Japanese specialists involved in mass screening of the thyroid gland in children was one of the important stages of the work of experts currently preparing recommendations for mass screening in the case of major radiation accidents such as the Chernobyl and Fukushima accidents. The developed recommendations will form the principles of ultrasound examination of the thyroid gland after a radiation accident on the basis of an analysis of modern scientific views on epidemiology, development of thyroid cancer and clinical intervention.
During the visit to the Fukushima Prefecture, the experts of the international group were also given the opportunity to visit the Fukushima-1 nuclear power plant and get acquainted with the current state of affairs at the station.